Bullseye is the local target shooting program supporting the “National Matches”. In 1903, President Teddy Roosevelt enacted Title 10 U.S. Code §4312 (National rifle and pistol matches: small-arms firing school). The War Department funded these matches in order to promote improved civilian marksmanship and familiarity with the Service Rifle and Service Pistol firearms of the day. Additionally, the Army instructs the Small Arms Firing School at the National Matches each year. Today, Bullseye continues with the support of both the NRA and the CMP, and local clubs like OSC.

A Bullseye match is also known as a “2700”, and consists of three 900 point matches (i.e., “.22”, “Centerfire”, and “.45”). Special matches such as Distinguished Service Pistol or Distinguished Revolver are optionally available at larger events. Matches typically follow a standard “900” format shown below. For practice, however, some clubs utilize an abbreviated “600” version. Two alternative “600” formats exist. The format used by OSC Bullseye practice consists of two NMCs. 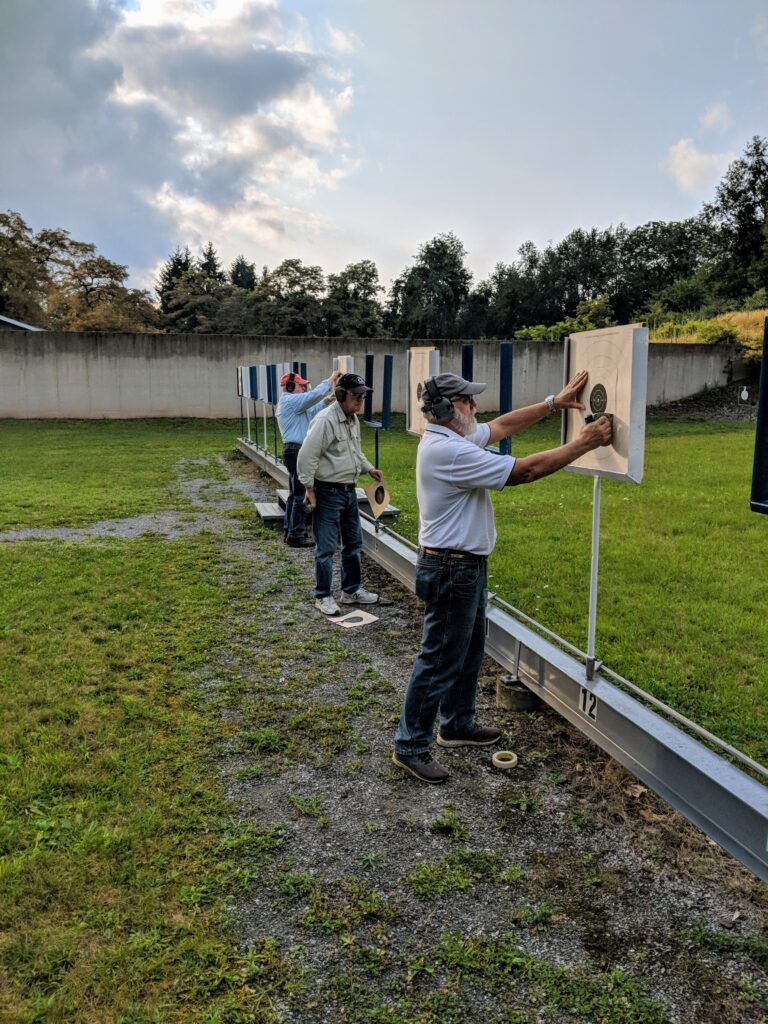 OSC restricts projection sights and certain types of ammunition. For full details concerning what to expect when competing in a sanctioned match, refer to both the NRA and CMP rulebooks for a complete discussion of the permitted and restricted equipment, allowable modifications, minimum trigger weights, and much more. Note that the NRA rulebook governs Precision Pistol (formerly known as Bullseye) rules, as well as Distinguished Revolver matches; the CMP rulebook governs Service Pistol and Service Rifle rules, as well as Distinguished Service Pistol (Rifle) matches, the President’s 100 (P100) matches, the National Trophy Individual (NTI) matches, and the National Trophy Team (NTT) matches. All CMP matches are contested using firearms satisfying the Service Pistol or Service Rifle definitions.

OSC does not permit hollow points or wadcutters in the indoor range (in order to reduce wear and tear on the self-healing rubber backstop). For the outdoor range, ammunition is not restricted.

OSC Bullseye practice tolerates mechanical problems without a reasonable limit. However, in a sanctioned match, it is important to understand the match structure because only one alibi per match is allowed for certain mechanical problems such as a “failure to feed” or a “failure to fire”. (These are commonly called alibis, and sometimes called misfires.) No allowance is given for forgetting to load or not seating the magazine properly. A “double alibi” within a single match will result in points lost, so it is prudent to have your equipment in the best working order possible.

Shooters will experience two key differences when travelling to official sanctioned matches. For expediency, OSC Bullseye practice uses a five minute SF period, rather than the standard “ten shots in ten minutes.” And for simplicity, OSC shooters typically fire the TF/RF targets during SF. OSC has SF targets available for shooters to use at their own discretion; these targets provide a greater challenge, however they will dramatically change your basis of scoring.

OSC Bullseye practice encourages new shooters to use either one or two hands, as needed. OSC recognizes that trigger time is valuable, and that, regardless of your preferred grip, Bullseye practice provides a great opportunity to improve fundamental skills. However, in a sanctioned match, Bullseye requires a one-handed grip of the firearm.

Note that there are significant differences between the NRA rules and the CMP rules concerning firearm grips or stocks. The CMP (Service Pistol definition) is quite strict, while the NRA permits more options, including supportive orthopedic grips. However, in no case may a shooter gain support from anything beyond his or her wrist. Additionally, in a sanctioned match, no support may be taken from the shooting bench.

The OSC indoor range provides partitions to separate neighboring shooters and, to a limited extent, protect shooters from flying brass. The outdoor range does not provide this, and neither do most ranges, including Camp Perry. When competing in such places, it is prudent to provide your own protection from just-fired brass. Hot brass burns and it will leave a mark. It is bad enough laying on your arm, but when trapped in a shirt or a blouse, it can be very disruptive. If you are fortunate, the shooter on your left may be using a brass catcher, however these are not common; be prepared.

Range design influences gear. Throughout Pennsylvania and abroad, outdoor Bullseye ranges are typically constructed with one firing line, and two sets of targets — one at fifty yards for SF, and a set of turning targets at twenty-five yards for TF and RF. However, the National Matches hosted at Camp Perry feature two firing lines and a single set of targets. As a consequence of this, it is necessary to quickly gather your gear and transport it from the SF firing line benches to the TF/RF firing line benches during the NMC of the match. In order to satisfy this requirement, shooters have devised many solutions, but the most commonplace answer is the shooting box. You do not need one for practice at OSC, but you should understand why they exist.

A major contributor towards safety is understanding when the firing line is hot, and when it is not. The range becomes hot with the “load” command. Please note that is the last word of the sentence “with five rounds, load.” Please respect the caller and refrain from snapping cylinders closed or seating magazines before the “load” command is spoken. After completing the course of fire, shooters are instructed to put “Empty Chamber Indicators” (ECIs) in place. They are designed to assist the visual verification that the firearm is both unloaded and that the breech is open. Pistols shooters will insert the ECI into the chamber and barrel; revolver shooters will insert the ECI into an empty cylinder chamber. Everyone is responsible for our safety. Sometimes that may mean offering your neighbor a friendly reminder (before the line judge arrives).

For OSC Bullseye practice, scoring is optional and each shooter will score themselves. At an official match, shooters typically score the neighboring target. Scorers may use overlays. Scorers are not permitted to “plug” targets with a magnifier, however the shooter may request that a line judge plug the target for the scorer’s review. After the scorer’s review, the line judge will mark the target “Plug In” or “Plug Out”. Targets which have been plugged may not be protested (because the insertion of the plug may have altered the target). Plugs may only be inserted only into single holes, not ragged holes resulting from multiple shots. Special scoring rules apply to “skidders” — shots which enter the target at such an angle that their entry hole spans two or more scoring rings. All skidders must be shown to have entered from the front of the target; skidders entering the target from the rear shall be scored as a miss.

Any cross-fired target is eligible for a re-fire at the shooter’s discretion. The shooter may elect to accept the lowest-scoring ten shots on the target, or re-fire the target completely. The shooter who fired the cross-fired shot(s) shall be scored with misses. At OSC’s indoor range, this is less of a problem, because all targets will be at 25-yards. At outdoor ranges, this can happen rather easily during the SF match at 50-yards. It can result in “off-by-one” errors, or sometimes even “off-by-two” errors when target markers are alternately painted different colors (such as the black and white markers at Camp Perry).

Any refire target shall be marked with the expected number of shots (determined by the line judge who investigated the alibi). The scorer will then score the lowest-scoring ten shots on the target. In the event that less than the expected number of shots are found, those missing shall be scored as misses. For OSC practice, each shooter optionally scores themselves. (Note that refires are often conducted at the end of the match, unlike alibi strings.)

In an official match, a shooter may protest the scorer’s scoring of the target for a nominal fee. In such an instance, the line judges or match director will score the target, with the advantage of special tools (e.g., Eagle Eye). Protests do not apply to OSC Bullseye practice, but you may encounter them at major matches.

The shot plan is designed to prepare the shooter for optimum performance. It is generally a set of steps (typically synchronized to the range commands) performed by the shooter. Every plan is unique to the individual shooter; an example plan is shown below.

Alibi — An excuse to repeat a string of fire due to some mechanical difficulty.

Failure to Feed — A jam of some kind, often called a stovepipe.

Failure to Fire — Verify that the cartridge was struck by the firing pin and left an indentation.

NTT — National Trophy Team match sanctioned by the CMP and held at Camp Perry. Four members shoot, including one “New Shooter” each year and three “Old Shooters”. Additional members are available for support.

P100 — President’s 100 match sanctioned by the CMP and hosted at Camp Perry. The top one hundred finishers receive a personal commendation from the President of the United States.

PRPA — Pennsylvania Rifle & Pistol Association. For Pennsylvania residents, this is the state-wide shooting organization which is responsible for establishing state teams in both the wad-gun (NRA) matches and the (service pistol) National Trophy Team (NTT) match.

This introduction is far from complete, but the author hopes that it may capture your interest for the sport and ignite the desire to compete with your own expectations. The author has recently returned to the sport after an eight-year absence due to other family sporting activities. The author is an NRA-classified shooter (outdoor Sharpshooter, indoor Expert) who has earned both the Distinguished Service Pistol badge (#1495) and Distinguished Revolver badge (#110) in 2011, and represented the state of Pennsylvania in the National Trophy Team match at the National Matches in Camp Perry.